Results of the 1st ASECU Teleconference 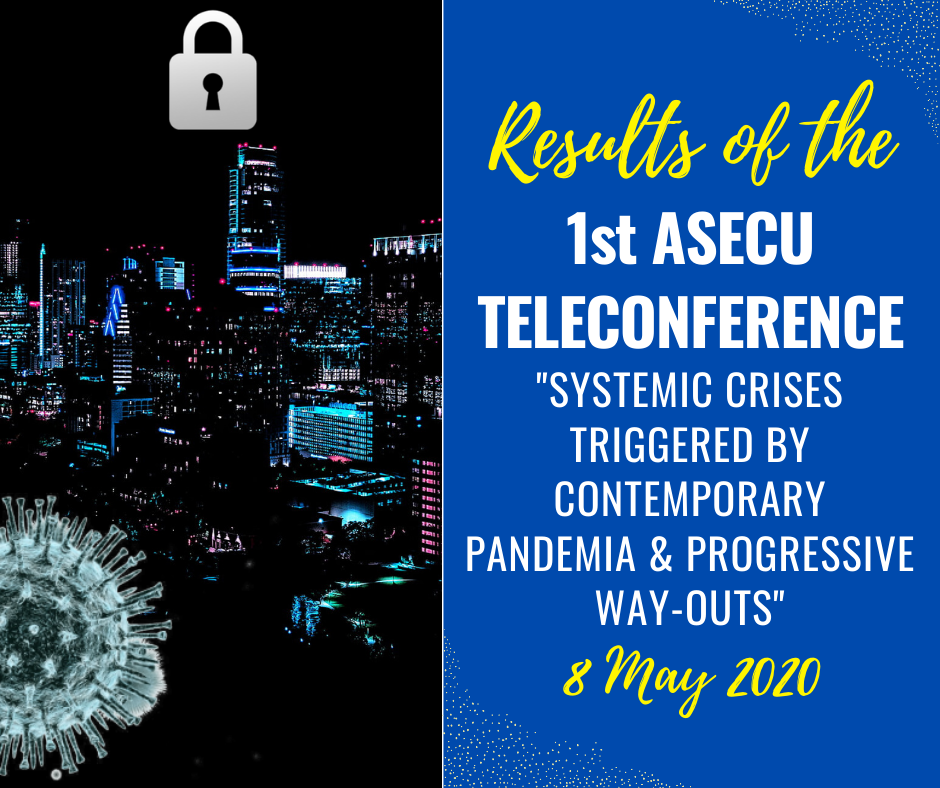 The 1st ASECU Teleconference “Systemic Crises Triggered by Contemporary Pandemia & Progressive Way-Outs” was successfully held online on May 8, 2020. The Board of Governors of ASECU initiated holding the event, since being an academic and research hub, the association felt the need and readiness to respond and contribute in time and efficiently to global debates, understand both deepness and painfulness of consequences, as well as introduce thinkable progressive, sustainable way-outs.

The Teleconference was divided in 3 large sessions: (1) Macroeconomic, (2) Business and (3) Societal Aspects of Pandemic Crisis. Each session had 5-6 prominent panelists and a moderator who presented the main points of his/her intended contribution. The rest of the session moderator led an open discussion of panelists, based upon the main ideas presented, as well as the questions addressed to the panelists online by the participating audience. In total, the Teleconference had 15 distinguished panelists, world experts in higher education, business and social sphere from Albania, Bulgaria, Greece, Japan, Poland, Republic of North Macedonia, Russia, Serbia, Slovenia, Taiwan, Turkey, the United Kingdom, and the United States of America. The full list of panelists and moderators can be found in the Call for Participation of the Teleconference.

The first session covered macroeconomic aspects of the crisis resulted from COVID-19, effectiveness and inefficiency of various instruments in the economic policy under the current circumstances. The panelists also discussed the issue of shifting to another trajectory of the world community development as a reaction to the crisis and its consequences, including the new economic models. Experts from the second session disputed more on the negative repercussions on the corporate business and entrepreneurs. The key impact of the pandemic crisis – virtualization and digitalization of economic process and distance economy formation – became the most discussed topic. The panelists of the third session covered acute social problems raised by COVID-19, namely a demographic problem, unemployment, poverty, and social inequality. By results of the Teleconference, ASECU will issue and post the E-Proceedings on the ASECU website.

To provide a chance to all those who failed to attend the Teleconference on 8 May 2020, ASECU recorded the live broadcast and uploaded the video on the ASECU & ASECU Youth YouTube channel: https://www.youtube.com/watch?v=Sh24Px8cFHg&t=12140s.

The Association of Economic Universities of South and Eastern Europe (ASECU) initiated the new event with a new format that is likely to become its annual tradition. ASECU is the union of economic universities proud of having its 56 members − universities and scientific research centers − from 20 countries. Since 1996, ASECU is giving life to new and bold initiatives, but it is most known for known for holding annual ASECU International Conferences. Until now, the Association enthusiastically organized 15 International Conferences. They were held in Greece, Serbia, Bulgaria, Romania, Albania, Montenegro, Russia, Poland, North Macedonia, Turkey and Slovakia.   For more inquiries about the ASECU, please, contact the ASECU Office (e-mail: asecu@uom.edu.gr).